Why bother with the 4 Ss of wine tasting?

It’s been a while since I did a wine post for beginners and so here we are, back tracking a bit to see what the art or science, if you want to call it that, of wine tasting is all about.

People often joke about wine tasters insuring their tongues, but as a taster, if I had to insure anything, it would certainly be my nose. A tongue can only distinguish between four tastes — sweet, salty, bitter and sour but the average human nose can tell thousands of scents. In truth though, the taste buds and our olfactory senses need each other. It is the combination of smell and taste that allows you to discern flavour. When this understanding was applied to wine tasting, experts came up with a simple system to maximise your experience — the 4 Ss. Here’s what they signify.

See: Looking at a wine can tell you a lot about it. For starters, it’ll hint at the age of a wine. White wines gain colour as they age — moving from a watery yellow to slightly golden hues. Red wines on the other hand, lose some of their colour and vibrancy as they age. A young red wine will be deep ruby, sometimes with hints of purple, but the longer it stays in the bottle it gives up that youthful sheen and takes on more brooding shades of brick-red. The hue of a wine can also give inkling about whether it was aged in oak or not. 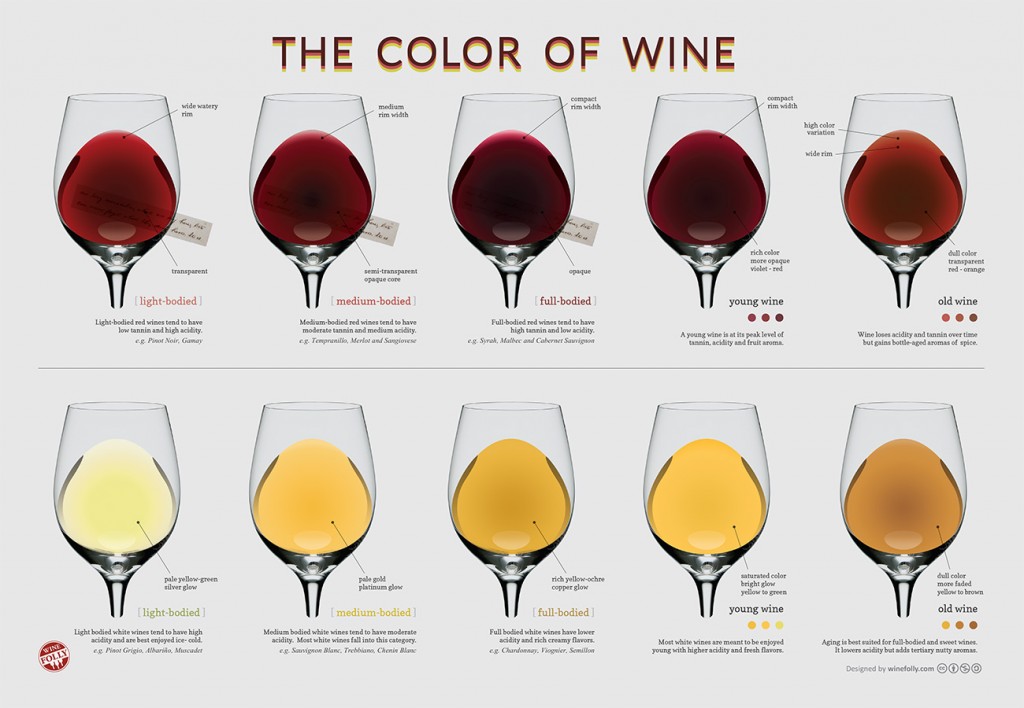 Wine Folly has a bunch of useful infographics like this one.

Smell: Why is smell so important to the perception of taste? Much like mangoes, grape varieties offer different tastes. You may not be asked to give tasting notes for an alphonso or langda, but you’d know instinctively which was which even if you tasted them blindfolded. Similarly, apart from varietal differences, grapes also take on a lot of the flavours from their surroundings such as the soil, the air, the forest nearby — all of which make their way into the final product. Hence, it’s not uncommon to taste salty notes in a wine that comes from vineyards by the sea. The aromas that come from the grape are primary notes; those that come from the oak are secondary notes and the ones that become apparent upon aging are the tertiary notes. That’s what makes wine so complex.

Swirl: Oxygen and wine share a love-hate relationship. If air enters the bottle it can ruin a wine by degrading it very quickly. Hence, the insistence on wine corks and proper screw caps during packaging. Once out of the bottle however, a wine needs to breathe to show the full extent of it’s personality. Swirling your glass allows the wine to come into contact with air, releasing a wider bouquet of aromas. Obviously, prolonged exposure to oxygen will strip the wine of a lot of its aromas and flavours, which is often why you’re told to finish a bottle once you open it.But no one expects you to have the nose of a hound. The next time you are tasting a wine think about what it reminds you of. We suggest a simple algorithm to beginners — when you smell a wine, try to associate the scents with those of familiar fruits. (If the word grape pops into your head, keep it to yourself. That joke gets old quickly.) For white wines, fruit aromas akin to peaches, guavas, pineapples and gooseberries often show up. In reds, think cherries, strawberries and plums. Next, think of vegetables, flowers, herbs and spices — bell pepper, lavender, cinnamon, black pepper and liquorice, among others. Finally, everyday whiffs — freshly-cut grass, leather, tobacco, wood and wet earth are notes that come up a lot more than you’d imagine.

Sip: The final test — the palate decides. When you sip a wine don’t swallow immediately. Hold it in your mouth and roll it over your palate for about 10-15 seconds. This helps to better ascertain the various elements of the wine. Ask yourself a lot of questions when sipping a wine — Does the perception of the wine on the nose carry through to the palate? Is the aftertaste pleasant and long-lasting? Does it make you want to have another sip, and another, and another? If the answer to most of the questions is “Yes”, then in all likelihood you’ve picked a good wine.

As much as we may try to prove otherwise, the science of taste isn’t really an exact science. Remember that it is subjective — who you’re sharing a glass with, where you are and sometimes just your mood at that moment — all influence your impressions of a wine. So when we talk about the science of taste, there’s only so far it can go. To paraphrase Einstein, it’s all relative.

(An edited version of this article first appeared in my alcobev themed column in The Sunday Guardian – http://bit.ly/1zPZDb8 )