Good beer should not be hard to find. In India, however, good beer is a luxury. So when there’s a beer event with craft brews, no effort is too great to make sure I’m there, even if it means flying to Delhi. That’s just what I did recently for an Australian Beer Master Class organised by the Australian trade commission.

For a beer market that clocks a double-digit growth every year, India still has a very limited range of international varieties. Workshops like these are few and far between, so this effort by Austrade was truly laudable.

The tasting was conducted by Sommelier Magandeep Singh, who took us through beers from three Australian breweries – Australian Brewery, Coopers Brewing and Nail Brewing. Along with the beers flew in David Ward, Australian Brewery’s Beer Ambassador (seriously, how cool is that designation!). Ward gave us an idea of what the Australian craft beer market is like, and trends that are slowly picking up – I’ve made notes for when I get to travel there. 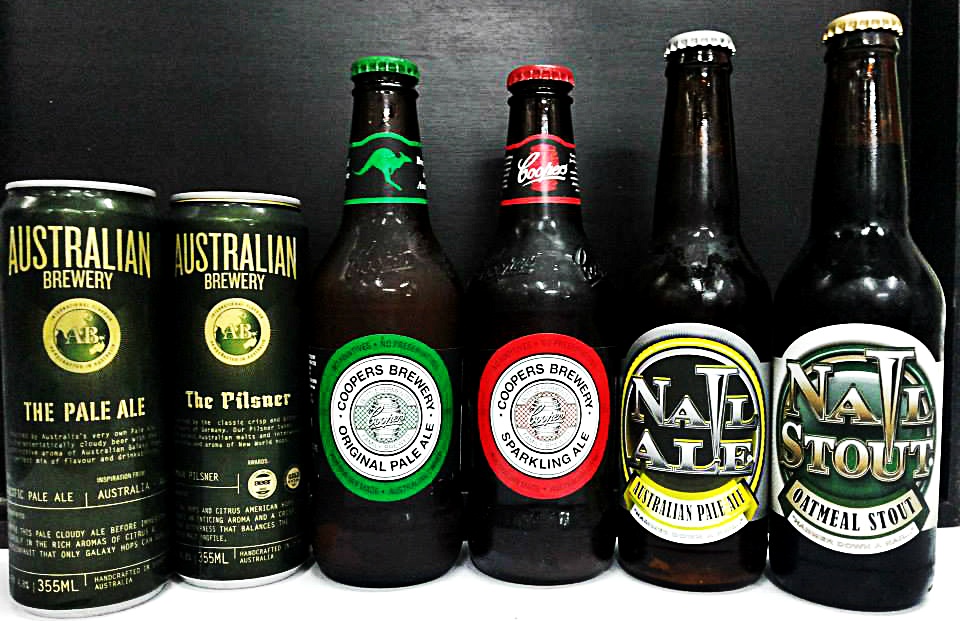 Australian Brewery packages its craft beers in a can and has pushed for a move from glass bottles to cans (which are more environment-friendly).

The Pale Ale – Australian Breweries Pale Ale is unlike the others I’ve tried. (Ward thinks the ‘Pacific Pale Ale’ should be a new category.) Extremely aromatic probably due to the Galaxy hops, which Ward said is a new variety that’s become quite popular in Australia. Strong aromas of mango and passion fruit, give a tropical, very fruity impression. I’m willing to bet Indian drinkers will lap this one up if it’s ever available here.

The Pilsner – Made in the style of classic German pilsners, this one is characteristically light and hoppy. Pilsners can be difficult to drink. I’ve shared a few with friends, and more often than not, they disliked the assertive bitterness. By most standards Australian Breweries’ pilsner is not too bitter and fairly easy to drink, made with US and NZ hops.

Coopers bottled beers are characterised by their secondary fermentation technique. This means that some yeast remains in the bottle after bottling. Hence the bottles contain sediment. How you drink a beer with sediment is entirely up to you. I prefer rolling the bottle horizontally between my palms for a bit, then pouring it into a glass and allowing the sediment to settle at the bottom. Some find that tipping the bottle results in a shaken beer and choose not to mix the sediment at all, simply opening the bottle and drinking.

Original Pale Ale – Quite characteristic of an English pale ale. Light, refreshing flavours of citrus and a herby spiciness. Suggested drinking method: The Roll – gently roll from side to side no more than three times before drinking.

Sparkling Ale – Although this wasn’t part of the tasting, a few of us lucky ones were given bottles after. My first tasting of a sparkling ale and while I didn’t expect much from it I was pleasantly surprised. Coopers Sparkling Ale is really quite good. It pours a lovely orange, with a creamy head that dissipates fairly quick. The beer looks slightly cloudy because of the yeast sediments, but clears a little once the sediments settle.  On the palate are toasty and biscuit flavours (from the yeast), a hint of citrus and a slight caramel sweetness on the finish.

Apparently, Sparking Ale is a very ‘Australian thing’. Coopers version was created by Thomas Cooper in 1862 as a tonic for Ann, his wife, which later led to the founding of Coopers Brewery. Because it was more carbonated than other ales and was conditioned in bottles it was called ‘Sparkling Ale’.  Suggested drinking method: The Rock – gently rock from side to side to stir the natural sediments prior to consumption.

This brewery’s claim to fame is that it is the maker of the world’s most expensive beer in 2010 – the Antarctic Pale Ale. No points for guessing that this one wasn’t part of the tasting. Still, the ones we did try left nothing to complain about.

Nail Ale: Australian Pale Ale –This is slightly in the style of the Australian Brewing Pale Ale. Although not as strongly aromatic as the former, the Nail Ale has floral and fruity aromas. It is pleasant and refreshing on the palate. Made with Tasmanian and German hops, this pale ale is not as hoppy (and thus not as bitter) as its American counterparts.