A few days ago I was at a wine tasting different from the usual. I’ve come to hate any event that claims to be a ‘wine and food pairing’. In the many I’ve attended in Mumbai over the last few years, only a handful have achieved what they set out to. It’s often as though someone’s googled their way through creating a ‘special menu’. Anyway, I’ll save all my reservations about paired dinners for another post and get to the point of this one – Fratelli’s Sette 2010.

I’ve written about Fratelli on multiple occasions and have believed in their endeavour since I first visited their beautiful winery in January 2012. Fratelli, York and Vallonne are the few existing Indian wine brands which I think have great potential. In Fratelli’s case this is credited to their Tuscan vintner Piero Masi. Far from being a consultant expat winemaker, Masi is almost like the 7th parent to Fratelli (the Indo-Italian collaboration has 6 owners), visiting the winery every few months overseeing everything from plantation, to harvest, production and blending. {Read The Story of Fratelli}

Sette, meaning ‘seven’ (an allusion to the 7 men behind Fratelli) is the brand’s reserve wine. The first one, Sette 2009 was launched last year and in a few months the Sette 2010 will be in the market. A few days ago a few select journalists and wine lovers were treated to a preview of the Sette 2010. But this wasn’t just any old tasting over dinner. Sommelier Magandeep Singh who hosted the night, took the group through a blind tasting. Since the Sette 2010 is made in the style of a Super Tuscan, the tasting pitched Sette alongside three international wines with similar blends.

The exercise was a first time experiment for the Fratelli team as well as the guests, but paid it off, showing that Sette 2010 could hold its own against bigger wines, while still being characteristic of where it comes from. While the familiar 2009 blend shows potential to age, the 2010 is elegant and smooth. It will be available in retail by October and hopefully will repeat the personalised labelling option of Sette 2009. Maybe I’ll get to do another contest, like this one- #GetSetteGo ! 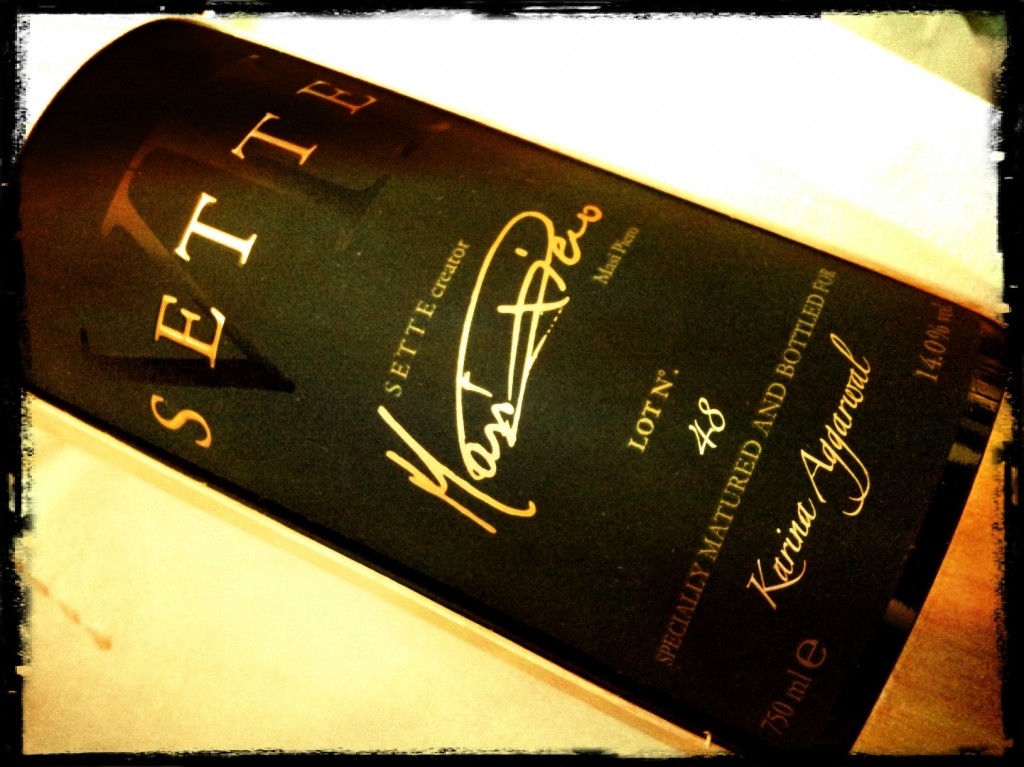 Below is the list of wines in order of the blind tasting and comments about each.

1.     Santa Cristina 2011: A lovely Italian IGT from the house of Antinori. At the beginning there was a string whiff of sulphur, but once that dissipated, it showed as an easy, fruity and modest wine. A good wine to begin an evening.

2.      Sette 2009: This was the first vintage of Sette and general consensus was that it was green with dusty tannins. Marked pepperiness, characteristic of Indian Cabernets. The Sette 2009 clearly requires patience. A couple of hours of decanting show the wine’s finesse – clean, fruity and floral (Sangiovese). The tasters kept going back to it through the night, appreciating it better with time.

3.     Querciabella Mongrana 2010: “The house of Querciabella is the modern Tuscan success story. Every wine they make is a precisely measured execution of what they wish to see in the glass. Few brands can claim to know their consumer as well and the success of this house is based on this intuitive ability of theirs,” said Magandeep. Mongrana is a newer blend from the house and at first taste was clearly the favourite of the first three. The only complaint was that it died a little too quickly. Still, an elegant, well-balanced wine and definite crowd-pleaser. Definitely one I want to drink again. (Available online at TheWineKart, if you’d like to try)

4.     Sette 2010: The blend is 60% Cabernet Sauvignon, 30% Cabernet Franc and 20% Sangiovese. A nose marked initially by crisp and fresh mint and currants, later evolved (on keeping for 30 minutes) into rose bush and dark forest berries. The mint lingered but it turned more spearmint as the wine was left to aerate. The tannins were supple and juicy, more derived from the fruit than barrels which hinted at more balanced oak usage. Some found the tannins a tad harsh but we had to remind ourselves that the wine is not yet released and by the time it hits the shelves these tannins would stand subdued to a much softer level. Clean and very pleasant on the palate.

5.  Il Querciolaia 2006: “This was a pure Bordeaux blend from the old Tuscan house with French roots. This was old style Bordeaux, classic and recognisable. One of the early Super Tuscans, it wasn’t trying to be international but instead trying to make a classy Bordeaux blend in Italy.” The initial nose was not pleasant and many second-guessed themselves, wondering if Magandeep had stuck in some Nashik wine in the mix. Upon being reassured that there were no tricks tonight, people expected it to be the Sette. Not the most encouraging thought, not just for Sette but even for Indian wines in general. However, once again, on airing, the wine was found to change drastically and show its pedigree.

← At the beginning: CMB 2013
Argentinean Malbecs with Wine Park →