Scout for this whisky on your next trip abroad

If you like your single malt then you’ve probably heard of Amrut by now. The Indian whisky brand shot into the limelight a few years ago when Jim Murray, author of The Whisky Bible rated it the ‘third finest whisky in the world’. Since then there’s been no stopping them. Although there are only 3 variants available in India, Amrut produces 18 expressions in all and is available in 40 countries around the world. They’ve now set tongues wagging again with their latest offering – Spectrum. 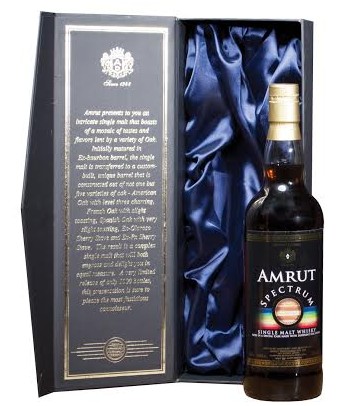 Spectrum is an experiment, the first of its kind they claim, that involves a specially crafted wooden barrel that borrows from five instead of one.

To put it in context: most whiskies are matured in one (rarely two) particular type of barrel. In every case it’s the style of wood that gives the whisky its colour and the majority of its flavours and aromas. Spectrum is influenced by not one or two, but six different types of wood. A custom barrel was constructed with staves of five different woods combined to create a single barrel with a mix of new American Oak, new French Oak, new Spanish Oak, ex-PX cask sherry cask stave & ex-Olorosso sherry cask. Plus, it’s aged in ex-Bourbon casks for three years before it’s put into the ‘Spectrum’ barrel for three and a half years. So technically that totals to six types of wood. Conceptually, these different oaks, some old, some new, were expected to give the malt a level of ‘complexity unlike ever before in the centuries of whisky making’.

As far as innovation goes, Spectrum gets full marks. I can’t give you a first-hand tasting note (yet) but at the launch in Sweden last week Ingvar Ronde, the author of Malt Whisky Year Book had this to say – “I can´t remember when I last experienced such a complexity of flavours in one whisky and at the same time, everything was in balance. I got coffee, chocolate, tobacco, cinnamon, cardamom, clove, orange preserve, sandalwood, walnuts, pecans, stracciatella and cocoa. This is pushing boundaries and whisky making at its best and I love it!”

Made entirely in Bangalore in India but not available here, Spectrum is bottled at 50% abv. The first batch has a limited release of 1000 bottles and is priced at £100 a bottle. Spectrum will soon be available with select retailers in Europe, Australia, New Zealand, Taiwan and Canada. Now you know what to save your alcohol allowance for the next time you’re overseas.

← Things you didn’t know about Champagne
Video: How to make the perfect Bond Martini →