If I wasn’t sold on the positives of being Twitter-literate earlier, I definitely am now.

The #KFBeerUp was legendary. And for any beer enthusiast, nothing matches the excitement of a tour through the brewery of their favourite beer. On 17 September, 30 Mumbai tweeps won a trip to the KF brewery at Taloja, followed by a KFBeerUp nite at California Pizza Kitchen, BKC. 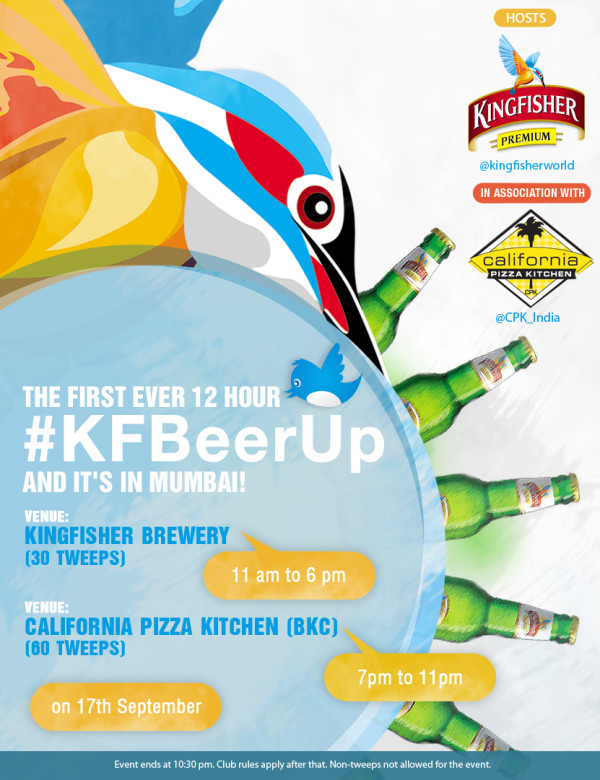 11.00am: Arrive at BKC where all the tweeps are gathering.

11.55: The sound of the engine is accompanied by 4 seconds of cheering, followed by a minute of complete silence. Time to tweet. #surreal

12.16: There’s a chilled can of KF Premium in my hand! (Later that night I remember one of the tweeps distinctly telling me that he noted the exact time that the drinking began) And @kingfisherworld even remembered the chakna. Geniusness, I say!

2.00: Touchdown at KF brewery. You can feel the bubbling excitement in the bus, and you can read it at #KFBeerUp. Live tweets all the way.

3.30 – 4.00: The KF brewery tour. How is beer made? From the malt, hops and yeast to the bottling and packaging. AND heartbreak at seeing the amount of beer that goes to waste due to bottle breakage.

4.15: We’ve seen how it’s made, so we sit around the UB conference table, sip on some Heineken and discuss the appearance of a young-Vijay-Mallya (in the pics).

4.30: And we were off again. Headed to California Pizza Kitchen for the after party hoping we won’t get traffucked. We did of course (Mumbai on a sat night, whaddya expect?) but this time the driver drowned out all the ‘Bhaiya susu karna hai’ comments. I must admit the beer stretched the boys’ vocab quite a bit – piss, susu, pishab, toilet…I heard it all.

7.30: Shoved off the bus by the boys running toward the loo. CPK here we come!

I don’t think anyone left #KFBeerUp not raving about how great it was. Then again after a night with quirky tweeps, pizza, unlimited KF beer and lotsa goodies you can’t find much fault with the world.

Aditya Pawan, Group Product Manager and the go-to guy at the #KFBeerUp, says that since many other brands have followed suit and have started doing tweetups, they will continue to innovate and push the limits of the #KFBeerUp,  surprising people with new formats through the year. Count me in coz once a year just isn’t enough.

In the mean time I suggest that someone get started on the the #DIY #KFBeerUp. What is it? A do-it-yourself version of the event where tweeps who want to organize a tweetup can do so. KF helps with a venue and free beer. All we have to do is tweet using the #KFBeerUp hashtag.