On the Indian microbrewery trail

Inasmuch as I enjoy writing about malts and wines, I am shamelessly proud of being an ardent beer-lover. After a long day of wine tasting there’s usually nothing I want more than a nice cold fresh brew, one where the hops and the malt come together to create that perfect mouthful.

My recent jaunts have been about scouting for some of the best microbreweries around the country. Be assured that sampling the suds that poured forth from the taps is serious business. Here then is a round-up of the most interesting (and sometimes most promising) microbreweries I’ve encountered so far.

If you are a fellow beer-lover, leave me a comment below and tell me what you think of the Indian microbreweries.

Let’s begin with the city which is closest to being the Indian beer capital. In a city where the many restrictive laws play spoil sport to the party scene (the 11.30pm deadline being one of them), Bangalore has arguably the best drinking culture in the country. It is also in my opinion one of the few cities which gets better with every successive microbrewery that opens. From the good old days (even if just 3 years ago) when The Biere Club and Toit held reign over craft beer lovers to today when close to a dozen outlets serve fresh brews, the craft beer quality (and accessibility) has definitely improved and also served to evolve the consumers’ palate.

Arbor Brewing Company, a franchise of ABC Michigan, is among the new breed of microbreweries to open in Bangalore. From the outside, you’d mistake it for a small second-floor bar with a little outdoor space, but once inside, it resembles a rock & roll factory with ambient pub-style lighting and loud ‘comfort’ music (the kind that everyone knows the lyrics to). You are greeted by an army of steel tanks lined up sombrely just as you walk in and the tables spread out to both sides of you. The beer is clearly the focal point here. There’s a certain fresh vibrancy running through all of ABC – from the decor to the names of the beer like the Raging Elephant (IPA), Phat Abbot Tripel (Belgian Tripel), Red Snapper (Amber Ale), and No Parking (Pilsner) among others. 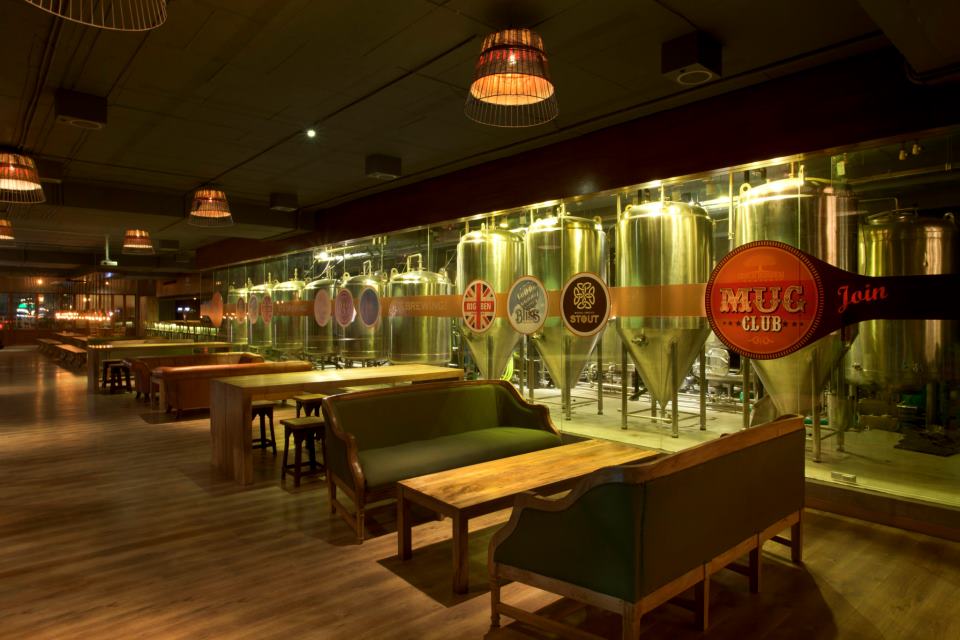 In the last year alone they’ve brewed over 30 unique beers and that’s what keeps patrons excited about coming back.The beer flight guides you through the range on offer. As part of their tasting flight, ABC serves a set of 8 with generous pours all around. The wheat is the crowd favourite, but the IPA, the Belgian Tripel, and the Amber Ale, were stand outs as well.

Also Visit: Toit holds fort strong and stout, pun intended. The Biere Club has good brews and great pizzas. Windmills Craftworks in Whitefield is worth the trek and Punjabi by Nature is also good enough to be included on a beer jaunt.

Gurgaon always draws me to make a particular observation and this is it: there’s a host of microbreweries in Gurgaon drawing in the crowds for a sip of fresh ferment but these places are clearly more about the ambience than the quality of beer. It seems to be a formula that works well though, and every new microbrewery seems to offer more in terms of entertainment instead of vouching for the quality of their beer.

Started by the same people who are behind the rather successful Striker microbrewery which is also in Gurgaon, Soi 7 tries to recreate the essence of a Bangkok side street, with a medley of other themes thrown in. With a massive arena outdoor where martial artists perform on certain days, this is a place for people to get their kicks and pints, if that ever was a combination. They have four beers on tap including the usual suspects – wheat, premium lager, and stout. The beers here aren’t anything to write home about and lack clear definition, but if in the mood for beer, I would pick one of these over a pint of Kingfisher any day of the week. In conclusion: Soi 7, with its mixed martial arts ring, in-house DJ, and a lovely expanse of an outdoor seating overlooking the concrete vista that is Cyber Hub, is a prime example of how ambience can matter most. Of course that most likely means you’ll have more people sipping on whisky or wine. Still, a great place for a night out but perhaps not quite the beer pilgrims’ destination.

Also Visit: Manhattan is a popular alternative as also Striker and although it looks and feels like most other breweries in Gurgaon, I prefer the beers here. Both microbreweries can be found in the same mall space, across from each other. My first visit to 7 Degrees Brauhaus was a total disappointment but I hear they’ve gotten better so I’ll make another trip soon.

Mumbai’s first brew pub and still the only one brewing in the city, The Barking Deer will go down in history as the one that got the ball rolling and generations down, fellow brewers and pub-owners will thank them for having taken on this task head-on and enduring right till the end. Two years worth of persistence by founder Gregory Kroitzsh finally culminated in November 2013 when the taps opened and brewer Ben Johnson’s brews poured forth.

Fortunately for them, their success story doesn’t end with this achievement: the place is packed not just for its novelty value but for the fact that they really do know good beer. Trouble is that with the limited capacity of their tanks, they’re now down to just two beers on tap lest they run out of the most popular Bombay Blonde (German-style wheat) and Belgian Wit. My favourite though has been a porter which was brewed in a small batch at the time of the microbrewery’s opening, and will hopefully make a comeback. But there’s little reason for despair as they also happen to have an exhaustive list of beers from around the world, long and wide enough to make any beer aficionado sit up and notice. Add to this the great pub grub on offer and it makes for a good night (or afternoon) out.

(Ben is no longer at TBD. There are two young brewers who have taken over since he left. I haven’t had a chance to taste their brews yet, so let me know if you have.)

Any conversation about Mumbai’s craft beer scene is incomplete without a mention of Gateway Brewing Company. The men behind GBC had the same troubles to deal with as Kroitzsh. But Navin Mittal, Rahul Mehra and Krishna Naik changed tactics and decided to start a brewery instead, requesting for permission to supply their fresh brews to restaurants and bars across the city. To grab a glass, or two, or seven, head to Woodside Inn – Colaba, Woodside All Day – Andheri, Bonobo – Bandra, Jam Jar – Andheri and Olive Kitchen -Bandra. They’re also at Independence Brewing Co in Pune. On tap now – White Zen (German Style Wheat), Like That Only (Blonde Ale) and Indian Pale Ale. The IPA wins hands down! 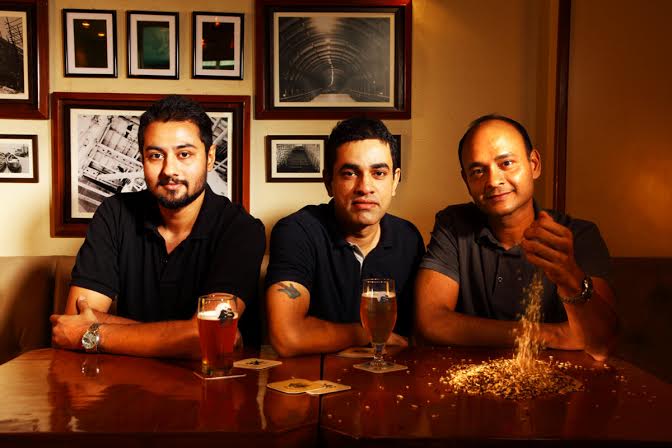 What do you do if you want to brew beer in a restaurant you own but don’t have the space for the entire set up? You call Amit Adatia. That’s what popular party spot in Goa, SinQ did recently. Now SinQ Brew is the city’s first and only microbrewery.

Under Abhijit Impex, Adatia imports specialised brewing machinery called House Brew. These machines are not as elaborate as the usual set-ups. House Brew’s method requires just three cylindrical tanks – one fermenter and two for storage. They simplify the beer making process by eliminating the first few steps. With House Brew, there’s no hunting for grains, hops or yeast, instead just open a pre-processed beer mix and you’re halfway there. There’s of course a variety of mixes including Pilsner Light, Golden Lager, American Brown Ale, Golden Ale, and Indian Pale Ale among others. Adatia says that House Brew machines can manufacture about 500 litres of beer per week in a brew cycle of five to seven days and the beer mixes are of ISO 9002 quality ensuring an international standard.

Beer purists will no doubt scoff at this ‘out of a packet’ formula, but to most consumers if it tastes like the real deal then it is good enough. I haven’t tasted the beers at SinQ Brew yet but the next time I’m in the city I’m definitely making a beeline for it.

In 2010 two Indian beer lovers met in California and soon fixed on a plan to bring artisanal, craft beer to India. Shortly after, Shailendra Bist and Avanish Vellanki met Greg Koch, co-founder and CEO of Stone Brewing Co., which is widely credited as the company that heralded the beer revolution in America. Koch had visited India in the past, and while he realised that the Indian market posed many challenges for Stone (and other US-based breweries), he was convinced of the need to introduce India to the world of craft beer. He came on board as an advisor, investor, and ultimately a partner of what would become the Independence Brewing Company.

Today IBC is spread over a sprawling area and is fitted with impressive equipment. If all goes as planned they will be able to serve their brews in a few weeks. As a brewing philosophy, the team goes with the simple premise of making beers that they will enjoy themselves.

Although Pune’s been among the first few cities to have instituted a microbrewery law, it hasn’t grown as one would expect in terms of quality of craft beers, but I believe that IBC holds great promise. In a market where Doolally has long been considered the only worthy microbrewery, hopefully we’ll see another unveil soon. Besides, the more good beer there is out there, the better for everyone.

This article by Karina Aggarwal appeared in Liquid magazine, Jan-Feb 2014. It has been altered slightly from the original. To read the story as it appeared click Cover Story-Brewpubs-Liquid

← New in the market: KRSMA Wines
Nocturne: The Party Champagne →