My introduction to barrel-aged cocktails came early last year. The process, I was told, involved pre-mixing a cocktail in large quantities and ageing it in an oak barrel (like the ones used for whiskies and wine). Once out, the cocktails would be richer in character and more complex in flavour. The time in oak would allow the different elements of the cocktail to blend more seamlessly and to mellow the sharpness of the potent ingredients.

I can’t remember exactly what my first barrel-aged (vodka-based) cocktail contained, but it was quite pleasant – well-balanced, flavoursome, somewhat complex. Frankly, it left nothing to complain about but, it wasn’t worth raving about either. So then why was barrel-ageing such a rage in America?

While in theory the whole thing made sense, I wondered whether it is was all hogwash created by bartenders to sell higher-priced cocktails. (It has been known to happen, you know!) In the year since, I’ve come across bartenders with opposing views on the trend – some that swear by it and others who brush it away as a gimmick. 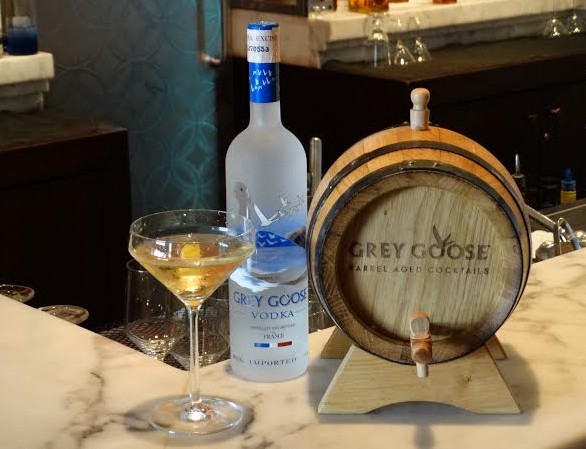 I decided to give this fad another try recently, when I heard about Grey Goose’s promotion – a special menu of barrel-aged cocktails. The menu is conceptualised by Bacardi India trade ambassador, Nitin Tewari and holds four concoctions, each aged in a barrel for two weeks. So I made my way to Harbour Bar at Taj Mahal Palace in Colaba, Mumbai for a taste.

My attempt wasn’t just to see how good these cocktails were, but to figure whether barrel-ageing really made that much of a difference. So I asked Abhas Saxena, Taj’s resident sommelier and sometimes the man behind the bar to serve me two versions of the same cocktail – one barrel aged, the other mixed freshly with the same ingredients. I love these little exercises, so I asked Abhas not to tell me which was which. The first round was of the cocktail called ‘Gateway of Bombay Barrels’, a mix of Bombay Sapphire, Port, Luxardo and orange bitters, garnished with orange zest. I imagined that as it does to whisky and wine, the oak (usually toasted) would impart a certain colour to the drink, and so going by appearances, I thought the slightly darker one would be aged. But once I smelt and tasted both drinks I realised that my initial assessment was wrong.

After the strong zesty notes subsided there was clearly an earthy, saw-dust -like aroma to one of the cocktails which could only have come from the barrel. The aged cocktail was also a lot smoother on the palate. Evenly blended, more subtle flavours, but not in the least less potent. Perhaps because it is aged in small barrels which don’t seem to be toasted, it loses some of its colour instead of gaining any.I repeated the experiment with a second cocktail – ‘Angel’s Share’ with Grey Goose, Martini Rosso, Campari and Cointreau, and came to similar conclusions.

Overall, I have to admit there is a difference between a barrel-aged cocktail and one that isn’t. Doesn’t mean I’ll only want barred-aged concoctions henceforth but the next time someone offers me one, I’ll be more willing to try it.

The barrel aged cocktails are available at Harbour Bar at Taj Mahal Palace, Mumbai until the barrels run dry. Each barrel pours about 40 drinks and they are already half way through. So head down there for experiment’s sake, if nothing else. They are priced at Rs 900 plus taxes, about 100 bucks more than their regular cocktails.

← New in the market: Chêne Grande Reserve 2010
The Chronicles of Chianti →