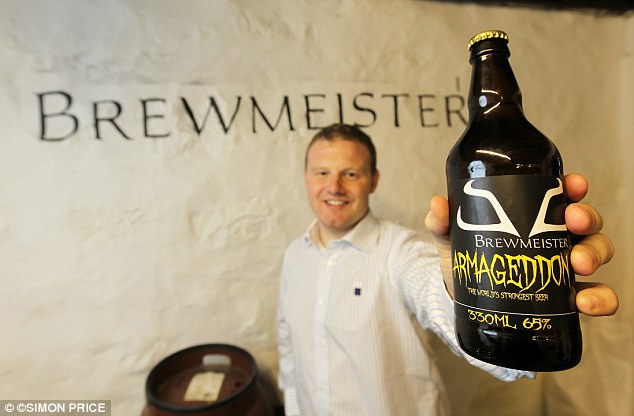 It’s always fun to see brewers try to one-up each other in their efforts to brew ‘The World’s Strongest Beer’. A heady title, that, and the latest to claim it is ARMAGEDDON.

Scottish Brewery Brewmeister’s Armageddon beer has an incredible 65% abv. The beer is brewed with a special freeze-fermentation method which involves cooling the beer to zero degrees while brewing. The water freezes but the alcohol doesn’t. The ice that forms is removed, leaving a very strong beer.

Here’s what the brewers have to say about the taste – “Despite being 65%, this beer has lots of flavour. It’s slightly sweet, hoppy, malty and retains much of the yeast present during fermentation.” At 65%, it would be an achievement in itself if it doesn’t burn your throat on its way down, don’t you think?

Just to be safe, Brewmeister suggests you drink it in 35ml portions. It’s unlikely that taste was what the brewers were going for anyway, but for a brewery that is just a year old it has certainly gotten them noticed! Armageddon sells at £80 for a 330ml pint.

My favourite part of this beer battle is the beer names they come up with. That’s enough fodder for a whole other post. We’ve had Tactile Nuclear Penguin, Oblix, The End of History and a few other quirky ones so far, and now of course there’s Armageddon… until the next.